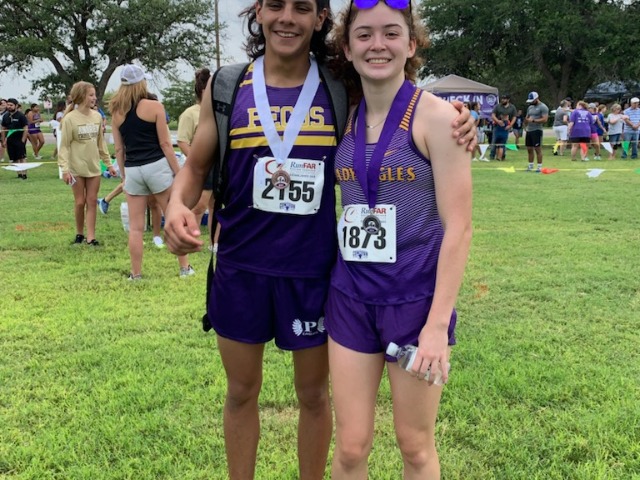 Ethan Chavez paced the boys and set a personal best of 18:04 to place 13th in the Division 1 boys race. Shane Serrano tied his personal best on the way to a 36th place finish. Their hard work this summer showed this meet and will set the tone for the season. They were followed by Zach Moya, Adriel Carrasco and Jose Perez, with Adriel cutting off nearly 2 minutes from his previous best time. Overall the boys placed 8th in the field.

A quartet of freshmen made their debut in the high school 5K distance after running 2 miles in junior high. Peter Juarez Jr, Lincoln Sadler, Gabe Gonzales, and Ethan Dominguez all ran hard and got the first race in the books. Now they will know what to expect and I expect they will cut some time in the coming meets.

The girls were led by Kallie Bullard who placed 2nd in the Division 1 race which was a 5K. She had really good splits and showed her strength as a distance runner to finish in 19:56. She has been training hard all summer and is ready for the season.

In the division 2 race, which was the normal distance of 2 miles, Rhode Duenas led a young team composed of mostly sophomores and freshmen. Rhode ran well to start her season, finishing in the top half of the race, and looks to continue improving each week. She was joined by Amri Vasquez and Emily Natividad who each are returning and look to fill some holes on the team. They were followed by a couple new faces in Mariah Rubio, who is running after being a manager for the last 2 years, and Amara Garcia who is a freshman. All are glad to have the first race in the books and are looking forward to getting better each week. Also running for the Lady Eagles were Arissa Bugayong and Iyisis Loa.

Four junior high runners ran the first race of their careers on Saturday. All were nervous to start the race, but found they were able to do this. All four are 7th graders and were led by Joe Rodriguez who placed 33rd out of more than 140 boys. He was joined by Brock Leonard who was exhausted afterwards but wants to keep running. In the girls race, Madeline Dominguez placed 50th out of more than 100 girls and was joined by Aubrey Tavarez. Both girls enjoyed the competition and look forward to continuing to compete.

Overall the kids did great. They will run next at the Wink Invitational which will be at the Winkler County Golf Course on Saturday, August 28th. The first race will begin at 9 am with the JH girls and role from there with JH boys, JV girls, varsity girls, JV boys, and varsity boys.
BACK